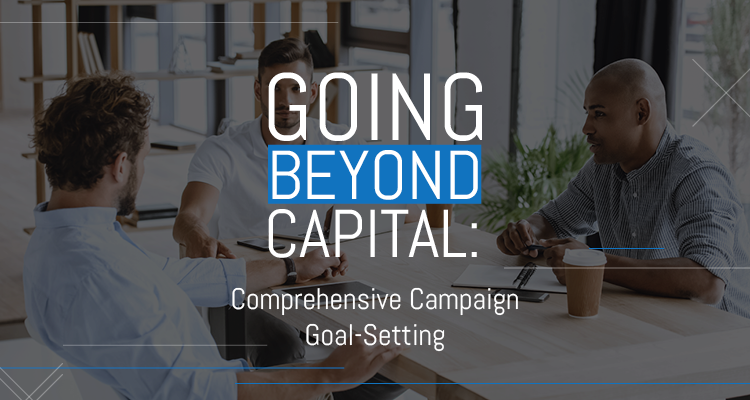 Do you feel overwhelmed by the sheer quantity of information and standard practices surrounding capital campaign fundraising?

If you didn’t know better, you might think that you can only conduct a capital campaign for building projects. But you’d be wrong. Before embarking on a campaign, take time to think carefully about all of the many things you might use a campaign to raise money for.

After all, nonprofit capital campaigns are hard work and require a lot of planning. If you’re not taking the opportunity to raise and accomplish as much as you can, you’re most likely leaving money on the table (and therefore missing out on growing your impact).

Comprehensive goal-setting not only helps you raise more, but it can also give you the flexibility you need for more sustainable, healthier finances once your campaign ends. If a capital campaign is (or might be) in the cards for your organization in the next few years, we want to share a few goal-setting steps to keep in mind.

When many fundraisers think of capital campaigns, they think of a shiny new building or renovation project. Of course, many campaigns are structured around funding a new building project that requires a great deal of money.

But you don’t have to limit your campaign to raising the funds only for that. You can also include a variety of other items in your campaign. Remember, capital campaigns build capacity, not just buildings.

Think of it this way: Donors aren’t motivated by the building itself. They’re motivated to support your campaign because the new building will make it possible for you to do a better job of serving more people and carrying out your mission more fully.

In fact, we often encourage nonprofits to explore a new form of capital fundraising—capacity campaigns—for that very reason. Capacity campaigns aren’t necessarily tied to specific building projects but rather to a range of other investments that would grow their capacity to serve constituents. The whole point is to use your campaign as an opportunity to maximize your nonprofit’s impact.

Taking a more flexible and comprehensive approach to campaign goal-setting needs to start with understanding that physical projects and tangible objectives aren’t the primary factors that will motivate donors to give. Your mission and your impact are the real reasons.

Step 2: Consider what else you might include in your goal.

Once you’ve freed your organization from any restrictive ideas about what capital campaigns can and can’t accomplish, you’re ready to move forward with brainstorming some specifics.

What else might you include in your capital campaign’s fundraising goal?

Neglecting to consider this question can result in a common problem: raising just enough to cover a new building but not other associated costs. Avoid this problem by folding additional anticipated costs into your core fundraising goal. For instance, capital campaigns for buildings frequently raise money for associated costs and investments like:

But remember, it’s your capital campaign. There’s no reason why you can’t raise funds for other capacity-related expenses that will drive your mission forward but aren’t directly related to a building project. For example, nonprofits often take the opportunity to also raise funds for:

As your plans come into focus, you’ll naturally refine your list of objectives that you’re raising money for. Don’t be limited by the costs of your building project. Your campaign’s goal should ultimately cover all of the core objective’s associated expenses, plus whatever else you think you will need to move your organization to the next level of operation.

With a comprehensive list of campaign objectives, you will be able to determine the working goal for your campaign and the related gift range chart that will serve to establish your campaign plan.

Once you’ve determined what you need to move your organization forward (the cost of a building, associated expenses, other capacity investments, etc.), you can establish a working goal for your campaign. This goal doesn’t need to be terribly precise just yet, but it should give your team, stakeholders, and prospects a good sense of the scale of your plans and what you’ll accomplish with the funds.

At this stage, being more ambitious than timid with your working goal is the smarter move. Here’s what we recommend: On a scale of 1 (timid) to 10 (impossibly ambitious), aim for a 7. Leave yourself the flexibility to adjust down to a 6 or 5.

Next, you’ll test your goal through a feasibility study. During the study, you’ll discuss your goal and campaign plans with prospects and stakeholders to get a sense of what they think is reasonable and achievable. Based on these findings, you can now adjust your goal up or down.

You’ll use this refined working goal in conversations with prospects during the campaign’s quiet phase. But even during the quiet phase, you still have the flexibility to make adjustments if needed.

For instance, if it looks like you’ll ultimately raise less than anticipated, tweak your plans accordingly. Your working goal will have only been shared with a handful of donors at this point, so making necessary adjustments now will be the better choice than later publicly announcing a goal that you’ll be unable to reach.

Capital campaigns can completely change how your organization operates. And since they require major investments of time and resources to pull off successfully, it doesn’t make sense to leave any potential support on the table or take an inflexible approach to goal-setting.

The least you can do is to avoid limiting your campaign from the start by setting an overly specific, restrictive goal. You can and should try to raise more for your mission, not just the core objective that spurred your campaign into existence.

Amy Eisenstein, ACFRE, and Andrea Kihlstedt are co-founders of the Capital Campaign Toolkit, a virtual support system for nonprofit leaders running successful campaigns. The Toolkit provides all the tools, templates, and guidance you need — without breaking the bank.